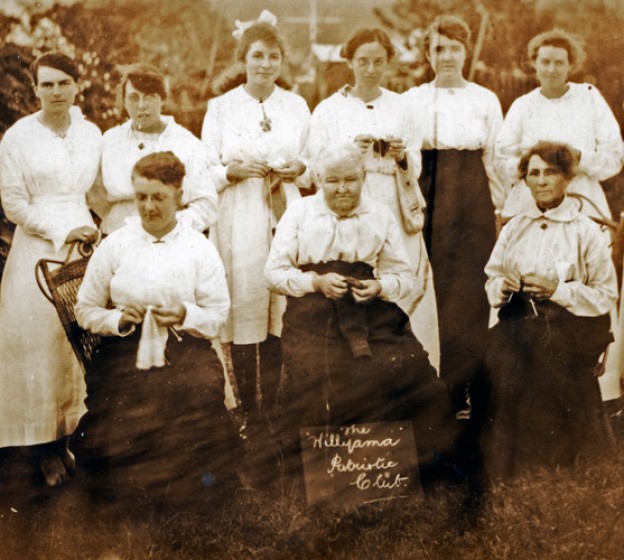 As World War One raged across Europe, women made their contribution to the war effort through fundraising and producing comforts for those at the front line. Some 10,000 patriotic clubs sprung, knitting warm items such as socks and mittens, making and packing cakes and sending care packages of tobacco, kitchen and medical items for the boys at the front.  They also sent letters of support to the men they had never met.

The group of Wollongong women in this photo called themselves the ‘Willyama Patriotic Club’ and here they can be seen at one of their knitting parties.

In May and July 1918, large parties were held in Wollongong Town Hall to send off local soldiers.  There was singing of songs including ‘Heroes of the Dardanelles’ and ‘Soldiers of Fortune’, the Coledale Orchestra performed and the Mayor J Mayo gave speeches declaring that the “cry of the nation was for men and more men”.  Each of the departing soldiers was presented with a parcel from the Willyama Club, the secretaries of the Club at this time were Misses Duchesne and Edwards.  The South Coast Times and Wollongong Argus declared that the ladies of the Willyama Club entertained the guests and their friends throughout the evening with song and good cheer.

Held in the collections of Wollongong City Library - Local Studies