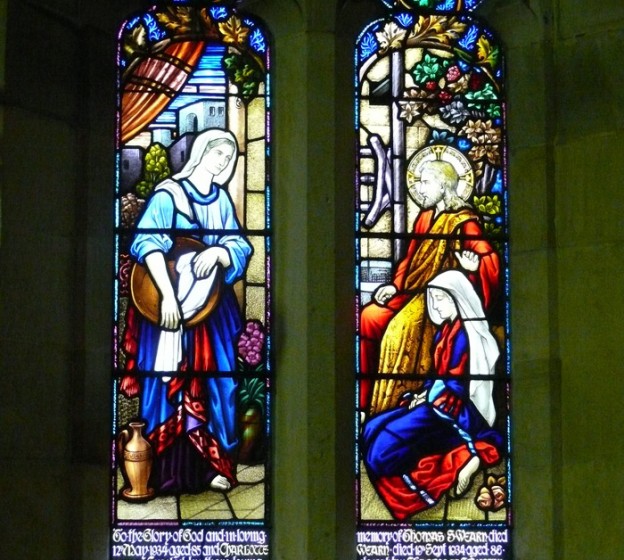 John Radecki arrived in Australia as Jan Radeski.  He was born in Lodz, Poland in 1865 and migrated to Wollongong in 1882 aged 16, along with his parents Paul and Victoria Radeski and four siblings. After arriving in Wollongong, two more children were born to the family. John’s father was a coal miner and died in 1904, becoming the first Polish born person to be buried in Wollongong. His mother died some years later in 1932.

After working in a local coal mine, John Radecki moved to Sydney in 1883 to continue studying art at the Sydney Mechanic’s Institute, and then continued his study in Posen, Poland. He went on to become a well-established stained glass artist with his own business in Sydney, John Ashwin & Co.

During his career John Radecki (as he was known) was commissioned to produce stained glass windows in religious and secular buildings in Wollongong, Sydney and regional NSW. He contributed to Wollongong’s architectural history by designing a number of stained glass windows in: St Andrews Presbyterian Church, St Michaels Anglican Church, St Mary’s Star of the Sea Chapel in Wollongong, and St Michael’s Catholic Church in Thirroul.
John Radecki died in Hurstville in 1955.

Radecki designed, made and donated a stained glass window in St Andrews Presbyterian Church in Wollongong as thanks to William and Elizabeth James of Shellharbour who in 1882 befriended the artist and his father when they were penniless migrants.

Other examples of Radecki’s work can be seen at Saint Mary’s Cathedral, Sydney (east rose window); the Navel Chapel, Garden Island, Sydney; Commonwealth Bank, Sydney (the ceiling of the Grand Hall); Mitchell Library, Sydney (Caxton window), and in many churches in country towns across NSW.

This two-panel piece window in St. Michaels Anglican Cathedral Wollongong  was designed by John Radecki in 1935 for Thomas and Charlotte Wearn. The inscription at the bottom of the window reads ‘Arriving on Forfarshire 16 January 1882’. The Radecki and Wearn families shared the journey to Australia.  The face of Saint Mary Magdalene from one of the panels resembles Charlotte Wearn’s face. Photo: E. Castle

A Coat Of Memories