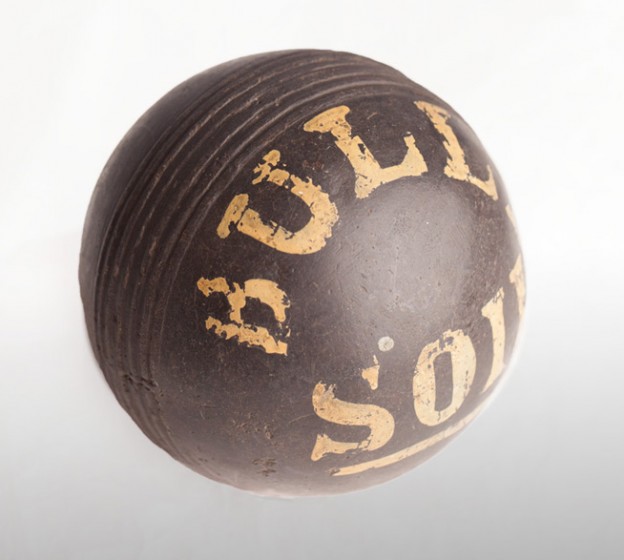 Hidden within this unique cricket ball is a very precious and much desired substance.

Bulli Black, as it is known, is a material made up of clay and basalt of volcanic origin.  It is used to make cricket pitches, the most famous being the hallowed ground of the Sydney Cricket Ground.  It is impervious to water and once rolled in, provides a very hard surface.

Originally, the soil was supplied to the Sydney Cricket Ground from 1891 by the Bulli Coal Company.  In 1924, as concern grew that the supply was scarce, the Sydney Morning Herald said that the SCG manager Mr R F Wyly was “hopeful of securing further supplies from the Bulli district”.

The properties of the soil were so impressive that 800 tons was sent to New Zealand in 1905 and to Durban in South Africa in 1923. During their 1920-21 tour of Australia, the English cricket team had an outing to Bulli, to see the home of the famous soil.

This cricket ball was created as a memento to commemorate the use of Bulli Black.  It has the black soil inserted into the wooden ball through a hole drilled into the wood and closed up with a dowel.

By 1946, supplies from Bulli became harder to find and the soil came from nearby Dapto.  However, today the Sydney Cricket Ground have a supply of Bulli soil ready for the ongoing task of providing one of the greatest cricket pitches in the world.

The Lost Village of Sherbrooke

Living and Working With the Environment