How Castagne Day Got Started 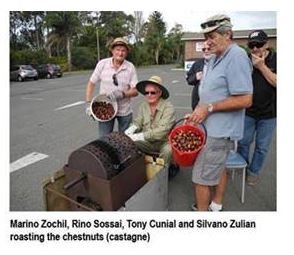 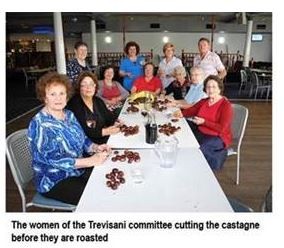 In the May 2018 MHP newsletter there was a brief history about the use of chestnuts and how this has been incorporated into Castagne Day held each year in May at the Fraternity Club. But how did this celebration get its beginning in Wollongong and end up at the Fraternity?

In 1976 the Association of the Trevisani nel Mondo was formed in Wollongong. The members of the association were drawn from those who were from the city of Treviso in Italy and its small towns who now called Wollongong home. A few months after forming, the then President and Secretary of the association, (the late) Effrem and (the late) Giulia Bonacina learnt that Braidotti Fruits and Vegetables (now trading as Leisure Coast Fruit Market and Deli) was selling chestnuts (castagne). Eager to celebrate their Italian tradition, a small group of members consisting of Angelo and Carla Boccola, Guerrino De Lazzari, Pietro Girotto, Rino Sassai, Vito Torresan, Gerardo and Giovanna Visentin who were joined with a few others, purchased a large amount of castagne, set up a BBO in Stuart Park with the intention to roast the castagne. Improvising, the group drilled holes in a large frying pan to “roast” the castagne over the BBQ. Whilst there are many other Italian associations and individual members of the Wollongong community, it is believed this would have been the first ‘public’ roasting of castagne and it drew a lot of attention attracting passers-by with the aroma of freshly roasted chestnuts and the laughter emanating from the gathering, even resulting on one occasion with a visit from the then Lord Mayor of Wollongong who joined the festivities and sampled the castagne.

Many members of the Trevisani nel Mondo association continued to enjoy this yearly get together to roast the castagne and each year the number of participants grew and it became a very popular event for the Italian communities at Stuart Park. The large frying pan with holes could no longer cater for the growing numbers so Rino Sossai, with Giovanni Comacchio and a few members of the Alipini Association, another Wollongong based Italian association, fashioned a drum with holes with an ingenious turning mechanism to enable a greater number of castagne to cook inside, roasting them to perfection over an open fire.

Eventually the numbers grew so large that the Association of the Trevisani nel Mondo knew they had to look for another venue to accommodate the growing interest. Carla Boccola approached the Fraternity Club who agreed to hold the annual Castagne Day on club grounds and so what started out as a small group of Italians roasting a few chestnuts over a BBQ in Stuart Park on a large frying pan with holes, we now have a Castagne Day each year enjoyed by large numbers of the wider Wollongong Community.

In addition to the annual Castagne Day at the Fraternity, the Alipini for many years provided the roasted castagne during Tutti in Piazza, the annual event held in the Wollongong Mall to coincide with the birth of the Italian Republic. Having collaborated with the construction of a large roasting drum, the Association of the Trevisani nel Mondo and the Alpini shared its use.

The chestnuts are also known to Italians as ‘the grain that grows on the tree’, as it was a means of survival in Italy during WWII when there was a shortage of grain and flour because of the hostilities.

During winter, in many town squares in Italy today, castagne are still sold and they not only nourish you but also warm your hands as you hold the hot roasted chestnuts in their cone shaped packets. Even today, children in Italy buy castagne on their way to school.

These days castagne are still popular and many people cook them at home with specially made frypans with the holes on the bottom that enables the heat to penetrate through to cook. To get the best result, before the castagne are cooked, a small incision on the hard peel is made with a special, sharp knife. After roasting, it is best to keep the castagne warm usually by wrapping them in a blanket for about 5 to 10 minutes to allow the cooking process to complete as well as making them easier to peel, still warm and delicious. Bon Appetit. 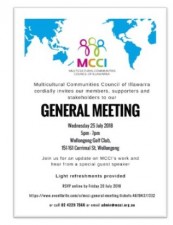 MCCI will be providing an update on all things happening for us here in the Illawarra, along with a presentation from a special guest speaker Mr Hakan Harman, CEO of Multicultural NSW. MCCI will be launching the latest U&Me film with Why Documentaries (featuring the kids from Wollongong Primary School) and showcasing some amazing partnership work lead by Wollongong Council & Wollongong Police called the “I Belong in the Gong” campaign.

The meeting will be held on Wednesday, 25 July 2018, 5pm-7pm at the Wollongong Golf Club, Corrimal Street, Wollongong (free parking on site or catch the free bus to Wollongong Council and wander down to the golf club).

How to register:  To assist with catering etc (light refreshments), register for this free event here:  Register

A recent email was sent by Multicultural NSW advising that the 2019 applications to be a contestant on Masterchef are now open. It would appear the cultural diversity of the participants and their food continue to entice the viewing public to satisfy the sophisticated palates of Australians. As explained in the recent MHP Food Business Exhibition ‘Stories of Early Migrants who Tantalized our Palates’ there is an historic link to migrants and the current interest in food and cooking. For more information about applying to Masterchef .  Read More