Peter, Harry and Theo came from the Greek island of Kythera, located on the southwest tip of Peloponnese Peninsula. In 1905, their mother died, leaving behind five small children; three boys and two girls. The soil on the farm was poor and the father struggled to support the family. To gain additional income he worked as a rural labourer.

In the early 1900s, Kythera’s political and economic situation including the lack of jobs pushed many young men to emigrate to the mainland of Greece or to other countries such as Canada, USA or Australia. Once settled many men sent money back to their families in Kythera. (1)

In the Tambakis family, Peter was the first to leave, arriving in Sydney in 1909. However he didn’t stay in Sydney, rather, he settled in Rockhampton and like many Greek immigrants at the time found work in the sugar cane fields. In 1919 he was joined by his brother Theo and in 1923 by his brother Harry. The brothers found additional jobs as kitchen hands and waiters in local cafés and restaurants run by other Greek immigrants, and would work there after a day of labouring in the cane fields. After a few years in Queensland, the brothers moved to Tamworth where from 1928 to 1933 they made their living running the Golden Bell Café on Peel Street.

In 1933 Peter, Harry and Theo moved to Wollongong and bought the Silver Bell Café from the Sansey (Tsaousis) family. The Café was located on Crown Street, in the vibrant part of the town, close to the corner of Keira and Crown Streets. The history of the café dates back to 1923, when it was known as the ‘Silver Bell Sundae Shop’ offering customer’s morning and afternoon tea, confectionery, icecream and sundaes. (2) In 1928 it was owned by J.H Adams and the business was re-named the ‘Silver Bell Café’, specialising in cakes. (3)

During the period it was owned by the Sansey family, the menu included hot and cold luncheons and grills, cakes and the best brands of confectionery for afternoon tea. When the Silver Bell Café was bought by the Tambakis brothers in 1933, they extended the menu to include homemade chocolates, cakes and hand squeezed fruit juices. From 1937, good food, an award winning window display of confectioneries and chocolates, an impressive and modern interior which included a mosaic tiled floor, and very smartly dressed staff, all contributed to the success of the business. (4) 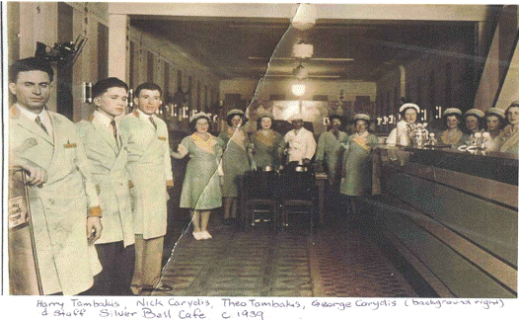 Tambakis brothers traded as Theodore Bros and under their management, the Silver Bell Café played an important part in Wollongong’s social scene for 23 years. In August 1956, the Café was sold and the building demolished giving way to a new building and the new ‘Coles’ store. Today the site is part of Wollongong Central Shopping Centre. However the sale of the café did not spell the end of business life for the Tambakis Bros. They bought the Black and White Milk Bar located on the corner of Crown and Keira Streets and remained in the café business until Harry’s death in 1969. (5)