Prior to arriving in Australia in 1920, Mario Borgo lived in Thiene, in the Italian province of Vicenza. In 1914 at the age of 17 Mario was conscripted into the Italian Army and fought in the Battle of Ortigara often called ‘the Calvary of the Alpini’. After being discharged from the army, Mario continued to work with his father and brother in their cabinet making business. The business did not bring in enough money to support the whole family so Mario, like many other Italians from the area, decided to emigrate to Australia. Mario had learned from a friend of his father, Mr Salvetti, that there were job opportunities in the newly opened coal mines in Newcastle and Wollongong. 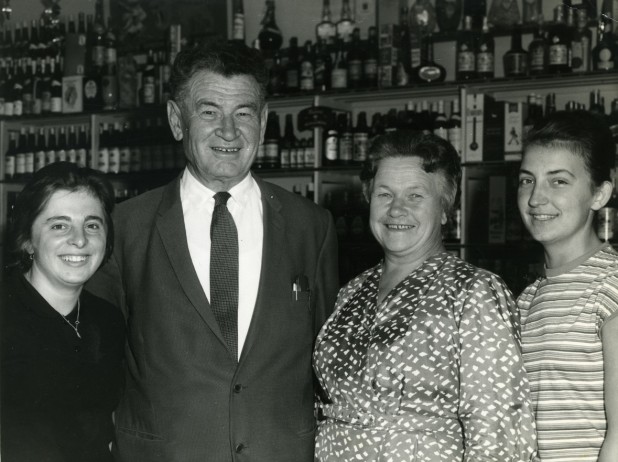 Mario and Giulia Borgo and two shop assistants in their liquor store, 1950-1960.

Photo from the collections of the Wollongong City Library and the Illawarra Historical Society.

Mario and his best friend, Fernando Corollo, arrived in Sydney in 1920 and chose to go to Wollongong over Newcastlle to build new lives for themselves and their families. Mario’s first place of living was the galvanised iron hut in the bush opposite the Clifton Hotel, not far away from the Coalcliff mine where he found employment. (1)  In 1919 the mine employed 337 men and it was producing 225,000 tonnes of coal per year. (2)  After 18 months, he left the mine and moved to Tarrawanna, known at the time as “Little Italy” and commenced a new mining job in the Mount Pleasant Colliery. Work in the coal mine however was hard and in 1927 he became sick and was diagnosed with ‘dust in the lung’.

Unable to continue working in the coal mine, Mario looked for another source of income and in 1930, he bought a ‘Liquor Shop’ from Lorrenzo Filippi. The shop was located downstairs in the Thorner’s Building, 275 Crown Street Wollongong and sold wine, beer and spirits and offered free delivery to its customers. (3)  Mario became a licenced merchant of wine and spirits. During his ownership of the business, Mario expanded the variety of beers, wines and sweet and dry sherries as well as extending his free delivery services to cover from Helensburgh to Nowra. (4)

The business prospered and in 1955 Mario moved to a new and much larger premises on the corner of Burelli and Kenny Streets. The new shop had a big front window with very distinctive shop signage: ‘M. Borgo & Sons - Wine and Spirit Merchants’. The product range was further extended with customers not only being able to buy local Australian wine and spirits but also Italian wine imported in barrels. Wine was sold in bottles that customers would bring back for ‘re-filling’. Later on, the shop became the first drive-in liquor shop in Wollongong. 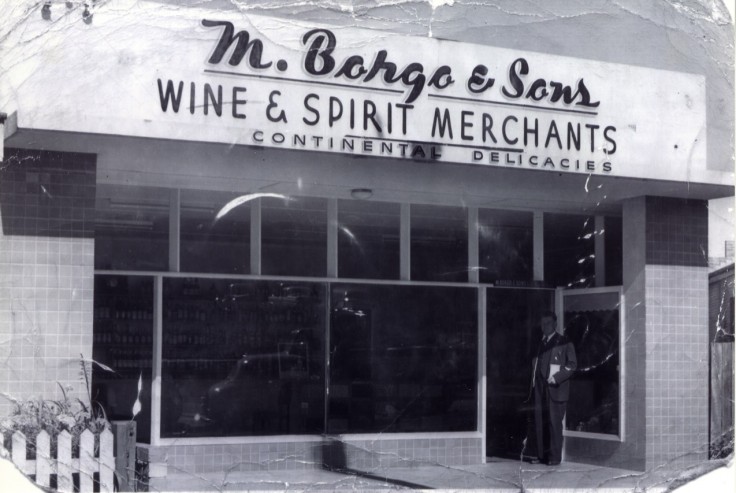 Borgo & Sons, Wine and Spirit Store, opened in 1955 at the corner of Kenny and Burelli Streets in Wollongong.

Photo from the collections of the Wollongong City Library and the Illawarra Historical Society.