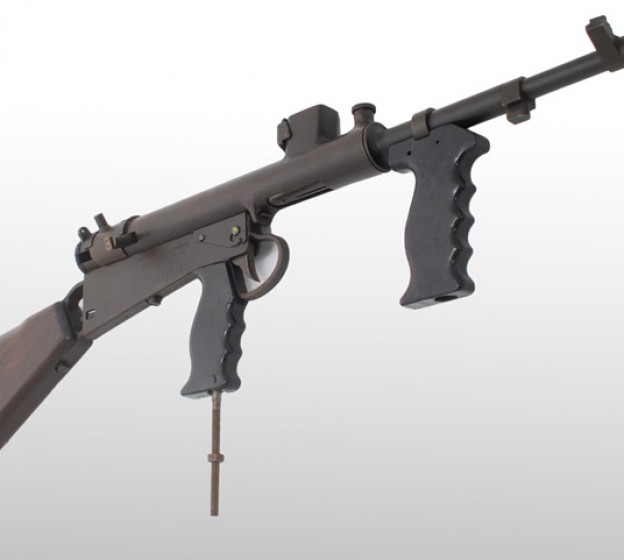 The Owen Gun, officially known as the Owen Machine Carbine submachine gun, is the only weapon entirely designed in Australia and was assembled right here in the Illawarra.

The ‘Digger’s Darling’ as it came to be known, was designed by keen inventer Evelyn ‘Evo’ Owen in 1938.  Evo was born and raised in Wollongong and attended Wollongong Highschool.  In 1939 he designed this .22 calibre machine gun and showed it to the Australian Army who had little interest in this type of weapon at the time.

After Owen enlisted in 1940, his fathers’ neighbour, who happened to be manager of local steel works Lysaghts, observed the weapon and saw its potential. Owen was reluctantly moved to the Army Inventions Board to develop the weapon.  Although the Army still had little interest in it, the government did, and the Owen gun went through a series of design trials using differing types of ammunition, until the final design was perfected.
The John Lysaght factories at Port Kembla and Newcastle produced the weapons and between March 1942 and February 1943 28,000 Owen guns were produced. Some 45,000 were made from 1942-44.

Soldiers appreciated the weapon for its reliability and soldiers from other countries took to the Owen gun with the United States and New Zealand placing orders.  The gun was also used in the Korean and Vietnam Wars.
The Owen gun was used by the Australian Army up until the mid 1960s when it was replaced by the F1 submachine gun.

In the photos above, a display of Owen sub-machine guns can be seen being transported on a truck in a procession through the streets of Sydney.  This parade was performed to demonstrate the immensity of the war effort in Australian munition factories.

The tanks, guns, fighting vehicles and lorries carrying products of Australian munition workers, numbered nearly 400 and took an hour to pass a given point. The photo is dated 12 December 1942.
Photographer:  Ronald Keith Monro from the collection of the Australian War Memorial.