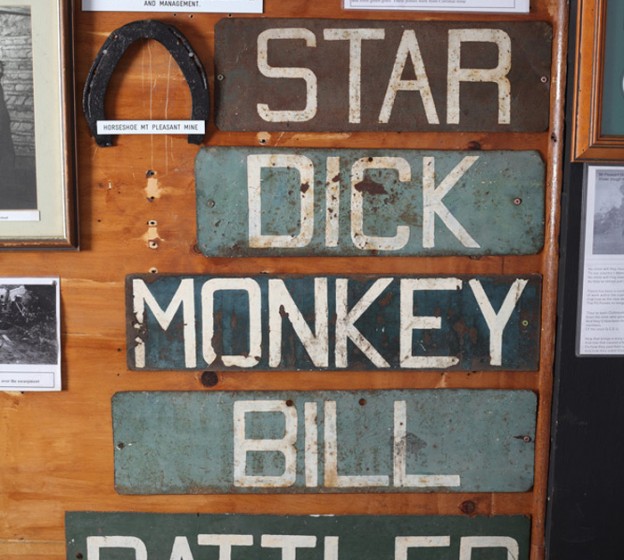 Horses and pit ponies have played a vital role in the local coal mining industry. Their job was to pull the heavy skips of coal along tracks out of the mine. Some ponies would spend all of their working week underground, resting in underground stables through the night, and brought to the surface on Friday afternoon for a weekend of rest in the mines paddocks. Others were returned to the surface at the end of each day, washed down, fed and reshod when required.

A wheeler was a young boy of around 14 who was assigned to work with the pit ponies. He would lead them through the tunnels of the mine to the areas where they would collect the trolleys of coal and then take them up to the surface. The ponies responded to voice commands and knew their way through the tunnels and back to their stables. The sixth sense of these animals saved the life of many a miner. There are stories of ponies who refused to enter a section of mine that subsequently collapsed the next day or even within the hour.

Just as many men and boys died in the 1902 Mt Kembla mine disaster, of the 30 ponies working on the day of the catastrophe, 18 were killed.

In Australia, the ponies could in fact be a taller breed of horse, but the name pony, has come into common use. In Britain, the use of pit ponies commenced in the 1700s. Mt Kembla Colliery closed in 1970, and used its last two pit ponies, Captain and Pinto until it closed, when they were transferred to nearby Nebo Mine to work. They were joined by Tom who was the last pit pony to work in a Mt Kembla mine into the early 1980s.

The last pit ponies used in Australia, Wharrier and Mr Ed of the Collinsville Coal’s No 2 Mine in Queensland, were finally retired in 1990 after many years’ service.